What are promotional products?

How is promotional products marketing used?

Since promotional products can be used alone or integrated with other media, there are virtually limitless ways to use them. Popular programs cited most often by industry consultants are business gifts, employee relations, orientation programs, corporate communications and at tradeshows to generate booth traffic.

What kinds of promotional products are available?

There are literally tens of thousands of different types and styles of promotional products. In many cases, it's even possible to obtain custom items that aren't found in any catalog. Examples of common items include: apparel, pens, calendars, coffee mugs, calculators, key chains, desk accessories and memory sticks.

What products are the most popular?

Advertisers spent more than $18.8 billion in 2006 on products purchased through professional promotional product consultants. For a breakdown of the top product categories and the market percentage they claim, click the link above.

Promotional products are ideal for creating awareness among a selected audience. Southern Methodist University conducted a study to measure attendee awareness of product demonstrations in three university communities. They found that selective distribution of promotional products outpulled school newspaper advertising by a ratio of two-to-one.

Promotional products, used as dimensionals in direct mail solicitations, can boost response rates by up to 75 percent, according to a study by Baylor University.

Email ThisBlogThis!Share to TwitterShare to FacebookShare to Pinterest
Labels: What are promotional products?

QR Codes, what is it, and what's it good for?

Ever see one of these before? 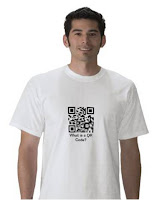 If you haven't, chances are you are about to, and you're about to see them everywhere!

This is a QR code and believe it or not, if you were to scan it with a special App on your smart phone, www.thinkideas.com will pop up!

QR codes allow smart phone users to photograph a code through a QR reader program and be redirected to a website, video or text message.

Check out this link and have some fun with this QR code creator.


There are many different possible uses for the QR code. Add them to any print advertising, flyers, posters, invites, TV ads etc. containing:


We plan to start using QR Codes in our marketing too! Keep a look out for specials, coupons and the like on Facebook, our web site and e-mail blasts.


If you use a smart phone, scan here:


Be sure to visit our web site, http://www.thinkideas.com/ for more information!
Posted by wbthink at 7:52 AM No comments:

Successful promotion campaigns don't happen by chance. To realize goals, promotional products programs must be carefully planned, taking into consideration the audience, budget and, of course, the ultimate result to be gained.
1. Define a specific objective.
Whether the goal is to increase traffic at a trade show exhibit or to boost sales with current clients, the first step in any campaign is to clarify the purpose of the program.
2. Determine a workable distribution plan to a targeted audience.
Distribution of a promotional product is as important as the item itself. Research shows that a carefully executed distribution plan significantly increases the effectiveness of promotional products. For example, a pre-show mailing to a select audience delivers more trade show traffic and qualified leads than simply distributing items to passerby at the show.
3. Create a central theme.
Linking a recognizable logo and color to all aspects of a campaign, from promotional products to sales sheets to product packaging, helps create an instantly recognizable image.
4. Develop a message to support the theme.
Supporting a campaign's theme with a message helps to solidify a company's name, service or products in the target audience's mind. For instance, to promote its services to small businesses, a bank created the theme "Are you tired of being treated like a small fish?" and sent fish-related products to its prospects along with promotional literature.
5. Select a promotional product that bears a natural relationship to your profession or communications theme.
A good example is a company that developed a magic motif for its conference at Disney World. Attendees received magic-related products to tie in with the theme "Experience the magic at Disney®."
6. Don't pick an item based solely on uniqueness, price or perceived value.
Don't fall prey to the latest trends or fads. The most effective promotional products are used in a cohesive, well-planned campaign.
Brought to you by Think Ideas
Posted by wbthink at 2:40 PM No comments: